Whenever we go to restaurants, especially in the South, if they have cornbread, you can be sure that Guillermo is going to order it.  He loves him some good ole cornbread.  Drowned in butter.   Healthy, i know.

He’s been working a lot of hours lately, coupled with quite a few meetings, and now gearing up for the next phase of Renos at home.  (Exterior hardscaping, landscaping and the basement)  Most of that has been mental energy as we sort out financing, and final plans.. and just gearing ourselves up for the fast pace of work & decision making again.

So, I spoil him a little with cornbread.  I found a great recipe on Pinterest, did my own typical additions/edits.. and he loves it.  I tried making cornbread a few years ago, and it never turned out, it was dry, not sweet enough (for his liking) and just bland…so I gave up.   A few weeks ago, I stopped by bulk barn and bought some cornmeal, and thought I’d try again.    This one seems to be quite good.   It’s going with a salad and chicken breast for dinner tonite… so at least he’s getting his veggies and lean protein as well. 🙂 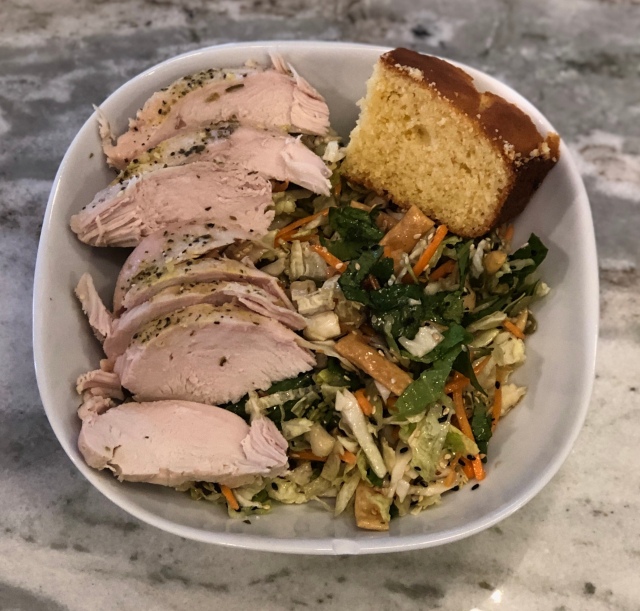 Here’s my edited recipe for “super fluffy moist cornbread” in less than 45 min…. 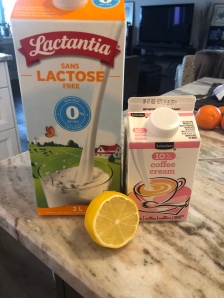 **re the milk… the recipe calls for whole milk… we only had 0% lactose free in the house, so I did about 3/4 cup of 0% milk, mixed with almost 1/4 c coffee cream (I try to keep cream in the house for company (we don’t use it), so it often ends up in baking replacing milk)

and added in about 2 tbsp of fresh lemon juice to make 1 1 full cup of “buttermilk” as one recipe stated that for the “fluffiest cornbread” to use buttermilk.   I learned the lemon juice trick years ago to make my own buttermilk.. it works like a charm.  It also adds a bit more flavour to the bread.

***Another secret (not so secret –  ’cause i’m sharing it) ingredient not in the original recipe was Honey.  I used local smoked honey from a Meadery in Beamsville, ON.  It’s amazing.  I’m tempted to eat it by the spoonful.

Today’s corn bread turned out super fluffy.. so much so, it cracked on top.   After it was all mixed up, I actually set the bowl aside for about 20 minutes before baking, which allowed the buttermilk, honey & baking powder to activate, creating a super fluffy cornbread.

I can hardly wait for Guillermo to come home from work and dig in happily.  It’s a little dark on top, but still super moist and fluffy inside.  I think it was just because it rose higher than normal that it got a little toasted.  (thank the rain)   This wouldn’t happen in a normal oven where there’s lots of room around the pan.. but for such a small pan, I use the toaster oven when I can. 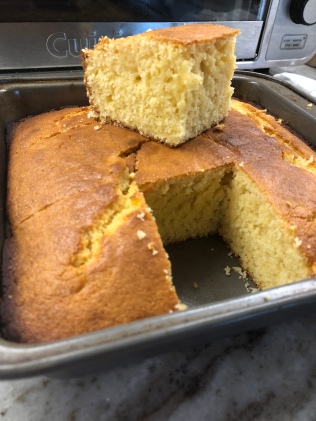 Another super simple recipe I found last week and have made twice now is for blueberry crumble bars.  Again, since I changed up the recipe I found, I’ll share it.

mix that up til it’s crumbly, and put all but one reserved packed cup of the mix on the bottom of a foil lined 8×8 baking pan, that is well sprayed/oiled. 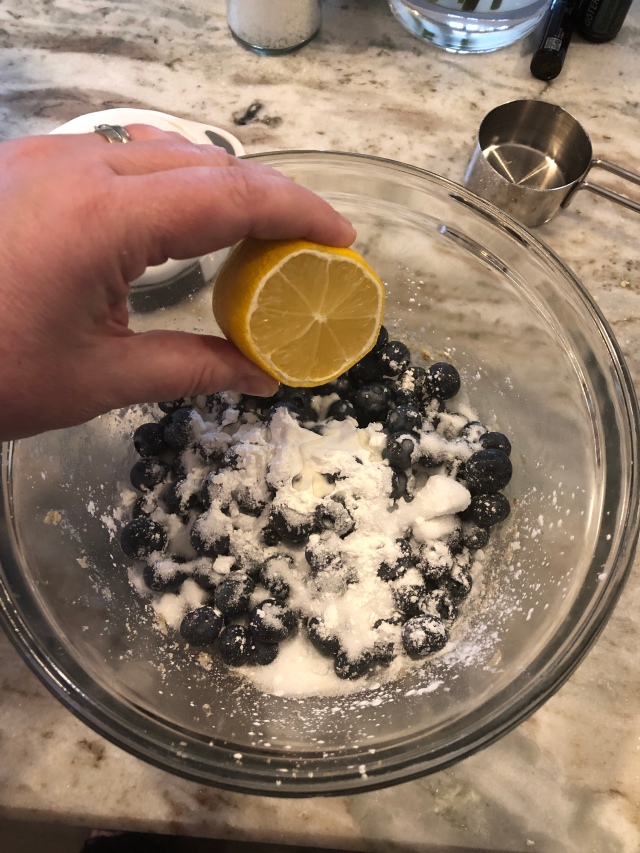 mix well.. put on top of the crumble base, then top that with the reserved crumble. 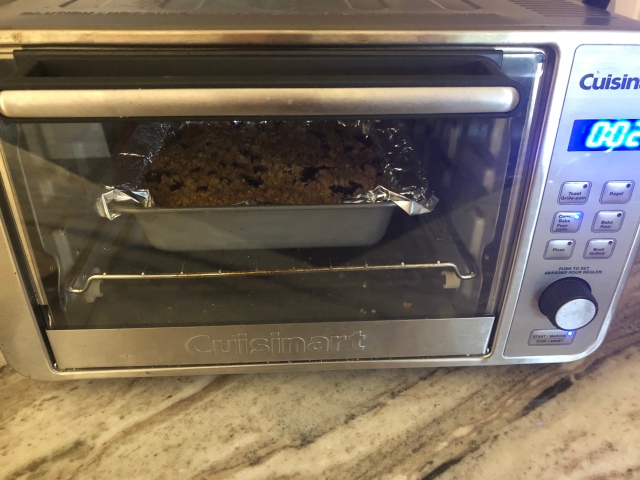 Other than the fabulous taste.. the best part of this recipe?  Super easy clean up.  This was ALL the dishes. 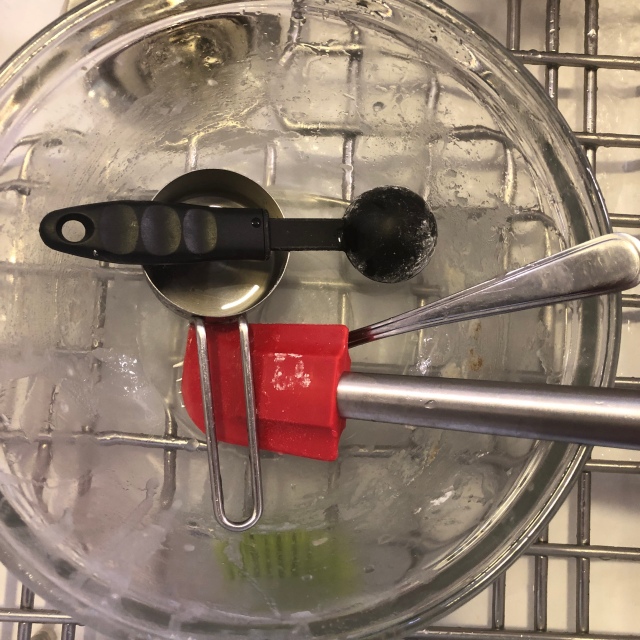 and the result? Sorry you can’t smell/taste it…

Yummm.  what a super simple way to use up some fruit and make a quick snack to go with morning coffee or afternoon tea….  if it lasts that long…

Bill (Guillermo 'cause he likes pretending he knows Spanish) and I (Amy) have been married since Sept 2005. We live in Southern Ontario, Canada - Niagara Peninsula in fact, smack dab between 2 of the Great Lakes. We love God, our family, our church family, and making each other laugh. (ergo the profile pic, he decided to make our photographer laugh by throwing a leg up on me just before the shutter clicked, which made ME laugh) When we married, I told Bill: "I don't know how to cook" but he had faith in me. So 15 years later, I'm still learning, and having fun. I've never (in my whole life) cooked a whole bird, chicken, turkey or otherwise. I've never roasted a beef, other than in a crockpot on low for 8 hrs. I like trying to find healthy & easy recipes and then I rarely follow them. I don't enjoy recipes that take hours or intricate steps. I have a special fondness for the Podleski sisters, writers/creators of the Looney Spoons, Crazy Plates and Yum/Yummer cookbooks. In 2018 we suddenly decided to rip our small house apart from stem to stern, moving out for 4.5 months while the house was demolished inside and out, and then rebuilt with an addition. If you go back in the archives to July-Dec 2018 you can follow that story. It's made our house open and so much more conducive to entertaining, small groups and large. It's given us the kitchen I've dreamed of to create and learn in. We feel incredibly blessed to be able to write about our journey, our faith in God and some fun recipes along the way. Thanks for joining us. View more posts