Since Guillermo has been laid off and at home, my routine & schedule is thrown right off.  May explain why i’m not blogging as much anymore.  I was in a groove.  don’t get me wrong, I LOVE having him home, but he doesn’t thrive by routine like I do.  Mealtime is the biggest issue, and then I get Hangry and cranky if I wait for him.   Today’s a typical day now that we’re both home…. it’s 2 pm, and he’s hard at work outside and doesn’t want to break to eat lunch.  He’ll be in likely by 4pm just as I’m putting dinner in the oven, drink 4 glasses of water because he’s dehydrated, eat half a loaf of bread and an apple, and look at me funny when I  try to put a dinner plate in front of him an hour or two later, because..yes, it is dinner time.  At some point we’ll have to figure it out.. cause in the meantime I do want to still prep & cook healthy meals, and not waste food.

Today he is oiling/prepping wood we just had delivered that is going to be made into raised garden beds for our beans, squash, rhubarb and other vegetables. 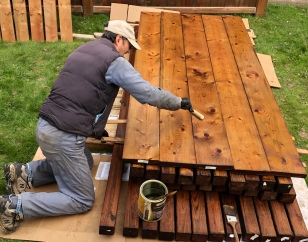 The weather has NOT been doing at all what it’s supposed to this week.  Today was to be sunny and warm with partly cloudy, but it’s been cold, damp and cloudy all day.  So I retreated to the kitchen, and just started pulling food out of the fridge and pantry. not sure what I was making – i was craving salad.. but not green salad.  I just started cutting up veg, and putting it in a couple different bowls until a plan came together.

Bowl #1 became a Greek Quinoa salad.   The dishwasher was running with my one and only good mesh strainer, so I ended up pre-rinsing the quinoa 1/4 cup at a time in a tea strainer, laughing at myself while i was rinsing.    Yes, rinsing quinoa is very important to remove any bitter flavour.  I tried once cooking without rinsing, and wouldn’t try it again.  It’s not worth it.   I added 1/3 of a veg bouillon cube to the water, and simmered for 20 min (1 cup of dry quinoa rinsed, 1.5 cups water, & 1/3 bouillon cube cut up. 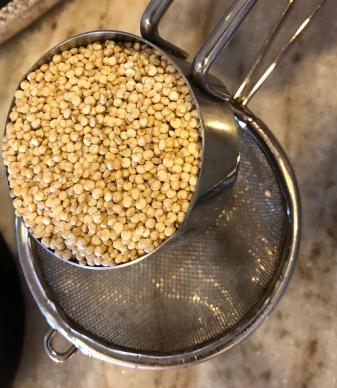 When it was done cooking, I dumped it on a plate to spread out and cool, and flipped about 20 min later on the plate to finish cooling. 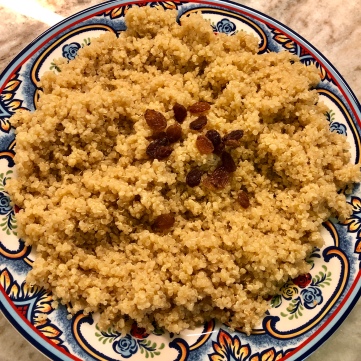 See those cards behind my plate?   They have been keeping me busy as well the last week.   I was sending out a lot of “thinking of you” & encouragement cards in the last month, and decided to make my own greeting cards.   I made my own Christmas cards about 6 yrs ago, and thought I’d try again.  These 4 are chosen from several photos I’ve taken over the years that I had been saving for either framing or making into card art one day.

a Magnolia encircled pond in Alfred B. Maclay State Park Garden in Tallahassee Fla.
Daisies from our garden
Bumblebee on Ecchinacea (also our garden)
Tulips from Niagara Parks 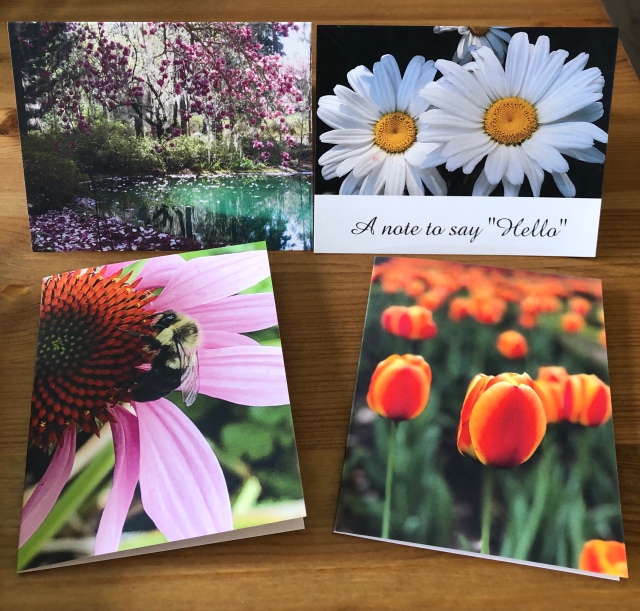 I also used photos inside 2 of the cards – one in faded colour, one in greyscale. 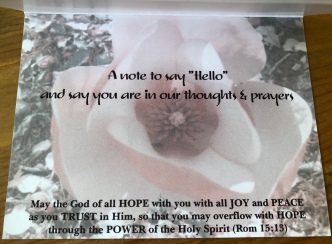 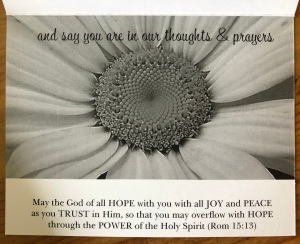 This verse from Romans 15:13 has been my go to prayer for those I’m writing cards to in the last month as we’ve been dealing with Isolation, fear, hopelessness, loneliness.

May the God of all HOPE fill you with all JOY and PEACE as you TRUST in Him, so that you may overflow with HOPE through the POWER of the Holy Spirit.

I think i mentioned this before, but it’s been such a blessing in return to send out cards and notes in the snail mail.  We’ve received so many phone calls, emails, and return texts of encouragement – and been getting to know some people that we normally don’t have opportunity to touch base with.

You may remember from the last blog post, I was prepping the base for some shepherd’s pies.   I put the 3 together the next morning, baked that afternoon, and we delivered with fresh baked chocolate chip cookies and a bowl of fresh berries.   We wanted to convey love and care to these 3 dear elderly gentlemen, and the response was great from all 3.  One of them called us 3 nights in a row (it was enough for 3-4 meals each) as he finished his dinner to again say thanks.  It took so very little effort on my part – and the appreciation was the greatest gift in return. 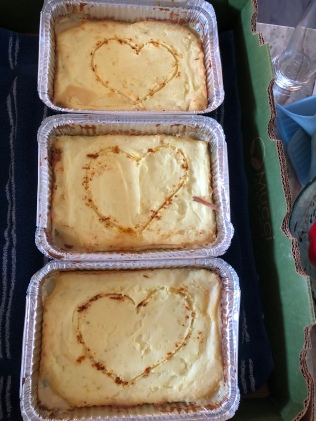 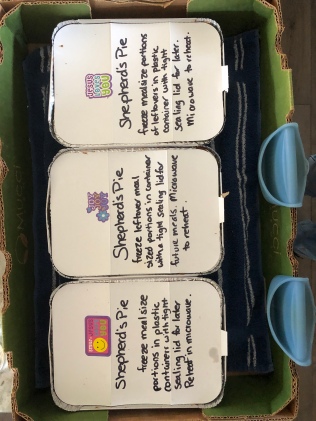 You may have heard about the family from Yorkshire who put a “commence silly walking sign”  by the sidewalk in front of their house… here’s a LINK  I decided to give it a try… not the silly walk, but the idea.

A friend gave me a bucket of children’s sidewalk chalk so I tackled about 6 sidewalk slabs in front of our house earlier in the week with a word or phrase on each slab.   SMILE, DANCE (we’re all watching) BUNNY HOP, SKIP, JUMP, DO the TWIST.    Hoping to get some smiles and cheer. 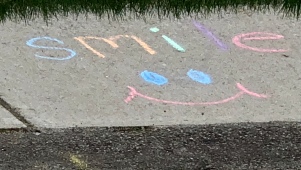 So far I haven’t seen any silly walking.. but I did catch one neighbour doing a Bunny Hop. 🐰  thanks for playing along!

Tonite I’m talking crispy oven fried chicken quarters for the first time.. They were realllllly inexpensive, and as we’re trying to budget, I thought I’d give it a try.. that will be next time… hope it turns out!

Bill (Guillermo 'cause he likes pretending he knows Spanish) and I (Amy) have been married since Sept 2005. We live in Southern Ontario, Canada - Niagara Peninsula in fact, smack dab between 2 of the Great Lakes. We love God, our family, our church family, and making each other laugh. (ergo the profile pic, he decided to make our photographer laugh by throwing a leg up on me just before the shutter clicked, which made ME laugh) When we married, I told Bill: "I don't know how to cook" but he had faith in me. So 15 years later, I'm still learning, and having fun. I've never (in my whole life) cooked a whole bird, chicken, turkey or otherwise. I've never roasted a beef, other than in a crockpot on low for 8 hrs. I like trying to find healthy & easy recipes and then I rarely follow them. I don't enjoy recipes that take hours or intricate steps. I have a special fondness for the Podleski sisters, writers/creators of the Looney Spoons, Crazy Plates and Yum/Yummer cookbooks. In 2018 we suddenly decided to rip our small house apart from stem to stern, moving out for 4.5 months while the house was demolished inside and out, and then rebuilt with an addition. If you go back in the archives to July-Dec 2018 you can follow that story. It's made our house open and so much more conducive to entertaining, small groups and large. It's given us the kitchen I've dreamed of to create and learn in. We feel incredibly blessed to be able to write about our journey, our faith in God and some fun recipes along the way. Thanks for joining us. View more posts